Sometimes the biggest challenges to livestock production are out of our control, but as producers we still look for ways to work around those obstacles. That is the case for one cattle operation in Northeast Louisiana where heat and humidity are at a peak as they approach weaning time.

“The humidity down here is the worst thing we fight,” said Colby Daugherty, manager at J&S Cattle at Bastrop, La.

Due to the operation’s size and scope – running more than 2,500 mama cows across five parishes – they wean all calves in one group, starting in early September. Ideally, most of those calves will weigh between 600-700 pounds, but like most operations, there are always calves that are a little behind, and they will wean some that weigh as little as 400 pounds.

With the group of light-weight calves already under increased stress, Daugherty knew he needed to find a way to help those calves along so he reached out to his BioZyme® Area Sales Manager, Chris Kyle. Daugherty decided to supplement the group of about 300 lighter-weight steers and heifers with Vita Charge® Stress Tubs after using the Vita Charge Cattle Drench on them.

“The calves never backed up, and when they stalled out they went to the tubs, which got them eating and drinking, and that’s the main thing. If I can keep these calves from going backward, I don’t have to regain that much ground,” Daugherty said.

At J&S they mix their own feed rations, and the faster they start eating it and gaining the better. They typically lose between 15-20 calves at weaning; in 2016, they had only four deaths – another positive he attributes to introducing the stress tubs to his calves.

“I’m very pleased with the product, and I will use it again this year. And this year I’m going to put all my calves on it to see how they do,” he said.

Daugherty had experienced positive results with another BioZyme® product, which led him to the Stress Tubs. At J&S they raise a lot of F1 females, considered the bovine “Queen of the South” that they then breed and sell as replacement females. Anything they can do to get those females bred earlier is a benefit, which is why they decided to start feeding VitaFerm® Concept•Aid® to his replacements heifers.

“I put the replacement heifers on Concept•Aid mineral this last fall,” he said. “When I pulled the calves off the cows, I started the cows on Concept•Aid. On our replacements, our breed back was at 89-percent, and the year before it was at 71-percent, so it did help me there. I was very happy with it.”

When he isn’t feeding Concept•Aid to his cowherd, Daugherty switches the cows to the VitaFerm 30-13% Protein Tub™ to make sure they are getting the vitamins and minerals they need for optimum health.

“So far, I’ve been really happy with everything we’ve tried,” Daugherty said. 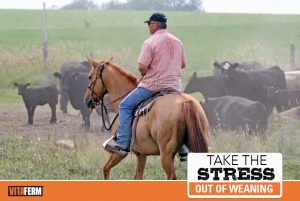