Multi-tasking is never easy. Imagine the life of a 2-year-old heifer just turned mama cow. She’s still growing and maturing herself. Now, she’s given birth to a 70-pound calf that depends on her as its sole nutrition source, and in 45-60 days needs to be ready for rebreeding for her second pregnancy. To make sure she is in proper condition, and can manage these multiple responsibilities, she must have a quality nutrition plan in place.

“Every situation is different, but a good mineral program and a good feeding program is the key,” said Neri Barstow, owner of Barstow Angus at Springview, Neb. “Two-year-olds are challenging. They have a lot of production built into them. They are trying to put a lot into their first calf, and they are trying to get themselves back into shape. You need to get enough energy back in them to allow them to achieve all these things.”

Barstow said he will start calving his herd of 250 registered Angus cows on Jan. 20. However, his focus on nutrition doesn’t start when that first calf hits the ground. He starts preparing those cows for their roles as mothers and propels their nutrition during the third trimester. He saves back his better hay and starts feeding that in early December, making sure their condition is right for calving and nursing a calf when the time comes.

“They go on a better meadow hay resource, and they get their protein from alfalfa. On those young cows, you’ve got to manage that body condition on them. If they go downhill a little bit, you’re behind the eight-ball. And, they can go downhill quickly,” Barstow said.

He also relies on VitaFerm® Concept•Aid® to help prepare them for calving and breeding. Vitaferm Concept•Aid is a line of vitamin and mineral supplements for beef cattle formulated to promote effective, easy breeding when fed 60 days pre-calving through 60 days post-breeding. High concentrations of vitamin E and organic trace minerals, coupled with the Amaferm® advantage, supports quick repair of the reproductive tract and more energy for reproductive success. Additionally, increased nutrient absorption and digestion leads to healthier and heavier calves giving the producer performance that pays.

“Several years ago, we were really having trouble with a group of cows, and we got on VitaFerm. We did notice that we got a lot more settled in that first 21-day heat cycle when we started breeding them. This spring, in a group of 40 head, we had 39 breed back in the first 35 days,” Barstow said.

After his first-calf cows are bred, he puts them on a total mixed ration that includes silage, alfalfa, distiller’s grain and roughage. He also makes sure they have plenty of clean, fresh water and maintains a strict vaccination protocol and parasite program. Perhaps just as important as his nutrition and herd health programs is keeping those younger cows separated from their mature counterparts, so they can continue to grow.

“We keep those first-calf cows separate until their calves are weaned off and then they go in with 3-year-old cows. Together, they go on fall grazing and we monitor their condition. If they are needing a little better diet, they get it. If they fall out of bed the next year, there’s no excuse for it,” Barstow said.

Finally, he makes sure during the “spring calving” days of 20 to 30 degrees below zero and blowing winds, that all the pairs have wind break protection and have bedding on the snow to help keep them as warm and dry as possible.

With about 85 to 90 percent of his calving completed in 45 days, Barstow places a heavy emphasis on getting his first-calf cows bred back efficiently. Coming into heat late and not getting bred back is definitely one way to be culled from the ranch in the rolling Nebraska Sandhills. Bartstow said if they don’t get bred within 45 days with that second calf, they usually don’t make it to their third calf on the family-owned ranch.

“We try to give them every chance we can on the those first-calf cows. It’s imperative. You’ve got a lot of money invested in them by then, and to have them have one calf and come up open or late, you’re losing money. When you take shortcuts, it costs you,” Barstow said.

Nutrition. Herd health. Management groups. Wind protection. These are all things that can help overcome the challenges that the multi-tasking 2-year-old cow faces as she calves, nurses and faces rebreeding. 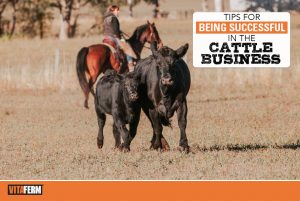 For outsiders looking into the cattle business, they might think it’s like the Dutton Ranch on the popular series “Yellowstone.” However, in real-world operations not every set up has brand-new, never dented or scraped panels with abundant labor – six or seven hired men – wondering what to do next. The Dutton family could learn a thing or two from hard-working progressive […]

If you’ve driven throughout the rural Midwest in the last week or two, you’ve likely noticed a significant difference in the landscape. Where tall corn fields once stood, you can now see for miles, as harvest is in full swing and only the stalks remain.  “In the upper Midwest and in the Plains, there is an […]