The RBC Ranch is situated in Southwest Arkansas, where lifelong cattle producers Steve Groves runs his SimAngus cows. Through trial and error, he’s discovered the best ways to make a living – keeping his herd healthy and productive. However, one thing he learned early on is never skimp on a nutrition program.

Although he has always been a believer in feeding a good mineral program to his cow herd, he realized that sometimes those top line minerals were missing something when he made the switch to the BioZyme® products several years ago. That missing ingredient:  Amaferm®, is a prebiotic designed to enhance digestibility by amplifying the nutrient supply for maximum performance. It is research-proven to increase intake, digestion and absorption.

“Amaferm is one of the greatest things that I would hate to do without. A lot of people look at a bag of mineral as a bag of mineral. They don’t realize the value. And this value we’re speaking of is backed with science. It isn’t something y’all just convinced me of,” Groves said. “I really believe that the Amaferm that is in this mineral is one of the greatest benefits in digestive value, and better digestion enhances the absorption. And, keeps the immune system revved up to a certain extent.”

Groves feeds a variety of BioZyme minerals, based on the time of year and the stage of production his cattle are in. The common denominator for all minerals he feeds is they contain Amaferm, which increases efficiency within his herd and ultimately helps him save some expenses.

“Our expenses seem like they are increasing more than what our product is merchandised at, so we need to get more efficient to make it work because we can’t control our input on a lot of areas, but we can control our efficiency. One way is to try to keep the cost of that cow down per year. Any increase we can get in digestion, means less dollars we have to spend on that cow for either feed or grass. With Amaferm we get a 15% increase in digestion and absorption and that helps a lot,” Groves said.

Cow Care Through the Year

Groves describes the climate where he lives and manages his herd along the Red River as “tropical,” and he admits he doesn’t have any Brahman influence in his cows. He said the climate is most challenging about twice a year, and those times also coincide with the cows’ biggest stressors.

“We have two parts of our season that are difficult,” he said. “In January and February when we are calving and July and August when it is hot. The summer is really more stress than in the winter.”

About 60 days prior to calving, Groves revs up the nutrition program for his late-gestating cows. He starts bunk feeding a silage-based ration to them, along with VitaFerm® Concept•Aid®. In addition to the increased digestion and absorption, Concept•Aid is a free-choice vitamin and mineral supplement for beef cattle specifically designed for reproductive success when fed 60 days pre-calving through 60 days post-breeding. Since switching to the Concept•Aid, Groves has noted a significant increase in his conception and calving rates, often achieving 100% in his calving groups.

Groves continues to feed the Concept•Aid through the time he turns the bulls out in March, until the weather really heats up. Then he turns to the VitaFerm HEAT® mineral. VitaFerm HEAT contains a mixture of plant extracts research-proven to maintain the animal’s body temperature. It also contains garlic, to deter insects.

“You aren’t going to get around the heat stress, so we try to eliminate all the other stresses like parasites, whether it’s flies or worms. We stay on top of stressors we can manage. We have a pecan orchard for shade and try to keep the brood cows under pecan trees that get to 50-70 feet tall. The sun can’t get there; it’s just humid, so we make sure they have water available,” Groves said.

With the combination of good management and good nutrition, Groves has been able to tighten his calving window, and said that most groups of cows will calve within the 60-days he’s allotted for. In one pasture of 85 cows, all but four cows calved within 60 days, and those four calved just slightly later. He said he’s had several groups of 45-50 cows that will calve within 50 days.

He also has a son who lives nearby him, who has started feeding the HEAT mineral with exceptional results. The son has no natural shade sources and practices intensive rotational grazing, moving groups of cows to graze about an acre per day with portable shade and water sources. Once Groves’ son started feeding the HEAT mineral, he was shocked to see his cows out grazing at 3 in the afternoon, but the bigger shocker was his calving rates.

“There’s been a time or two when he had 100% calf crop in 47 days, and those cows get fatter than they need to be every year. He’s a good grass farmer,” Groves chuckled.

There’s no doubt that weaning is one of the most traumatic times in a calf’s life; however, with the help of good nutrition, even those stressors can be reduced. Groves weans in the fall and backgrounds calves on pastures, if grass is available. Otherwise he bunk feeds them corn silage, and he markets those cattle in the spring. For maximum efficiency of his feed resources, he supplements with the VitaFerm Gain Smart® Mineral. He previously was using a cow mineral on his weaned calves and yearlings and realized he could save some money and get the nutrition he needed with the Gain Smart mineral.

Groves said that since cutting out the Brahman-influence in his herd, he has selected for more heat tolerant cattle that shed off better and have slicker hair coats, helping reduce the stress in both cows and calves. He also sees a premium for his SimAngus calves that he markets and can sell them at slightly heavier weights due to their increased gains.

Regardless of calving, breeding or weaning, Groves has discovered the benefits of the Amaferm advantage for all seasons and all stages of production. He knows that there is definite value in the science behind the BioZyme products and even when times get tough, won’t skimp on nutrition.

“When you go to cutting mineral costs, and she (the cow) doesn’t perform, you’re worse off,” he said. 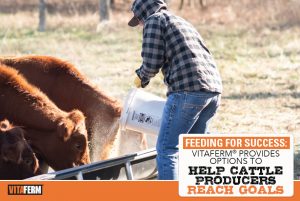