Old man winter has arrived in much of the U.S., which means colder days as many producers are preparing for calving season. And just as the temperatures decrease, the cows’ nutrient requirements can increase.

“During extreme cold, the cows’ nutrient requirements can increase up to 10-25%,” said Lindsey Grimes-Hall, BioZyme® Inc. Nutrition and Field Sales Manager. “The number one nutrient cows need in the winter and as they approach calving is protein.”

Protein is an important nutrient to the cow on many levels. First, it helps maintain proper rumen function, which encourages them to keep eating. When they are eating, and their digestive system is functioning, they can better thermoregulate since heat is being produced internally. Next, if they are in late-term gestation, protein is necessary to help keep cows in more ideal body condition while developing higher-quality colostrum. Cows with a higher body condition score (BCS) will typically calve out healthier, more vigorous calves that ultimately perform better.

Just like any season, a cow’s requirements are based on her frame size, BCS, age and stage of production. Large framed cows with lower body condition will always require a higher plane of nutrition. The same is true for females in late gestation or lactation. Finally, when it comes to age, both extremes need more nutritive care; 2- and 3-year-olds have higher requirements because they are still growing and maturing themselves, and older cows have increased requirements since they are not as efficient as they once were.

“After we focus on protein, then we can consider other nutrients like vitamins, minerals, energy and of course, water,” Grimes-Hall said.

It isn’t just the cold that plays havoc on the cows’ need for increased nutrients. It is the types and availability of forages as well as the environment that play a hand in the nutritional needs. Grass is now dormant, not offering the quality of continual nutrients it did throughout the summer. In many parts of the country, forages are covered with snow. And, in yet other parts, excessive mud exists requiring more energy than normal to get from one point to another, burning more of the cow’s energy and increasing her energy needs.

Even though your cows might look like they are in good body condition, Grimes-Hall cautions to make sure all vaccinations are up-to-date, including parasite and lice control.

“Lice always seem to set in in cold weather. Deworm and delice early before the dead of winter, and that should last cows all the way through to spring to help keep them in better shape,” she said.

To adequately supplement the protein and vitamin and mineral needs of your herd, Grimes-Hall suggests using products like VitaFerm® minerals with the Amaferm® advantage. Not only are these products fully fortified with vitamins, minerals, trace minerals and protein, they also contain Amaferm®️ is a prebiotic designed to enhance digestibility by amplifying the nutrient supply for maximum performance. It is research-proven to increase intake, digestion and absorption.

Although protein is crucial in the winter months leading up to lactation, water is always a vital element in nutritional health because it promotes intake and aids in digestion and circulation, while helping with the overall temperature control and health of the animal. In the winter a non-lactating cow will require at least 7 gallons of water per day whereas a lactating cows’ requirements double.

Even though they might not physically drink as much in the winter as they do in the summer, it is still important to provide an outlet to water that is clean and 40 degrees or warmer. If the water is too cold, the cows won’t drink as readily, and when they do, it will lower body temperature leading to cold stress.

“Water consumption increases circulation, which helps warm the body. Water intake drives feed intake, which drives electrolyte intake. If they don’t have enough water, the rumen shuts down and leads to compaction and constipation. That’s why I think it’s great to have a heater in your water tank if you can,” Grimes-Hall said. Learn more about keeping water tanks clear of ice in the winter.

Although ponds are a popular water source, extra caution needs to be taken when using them as such in the winter. They need to be fenced off or have the ice broken around the edges, so livestock don’t walk out and fall into the pond and drown. And, since the ponds do get muddy, make sure the pond has a fresh water supply available, not just mud, so the cows do benefit from it.

Nutrition is critical in all seasons. Amaferm advantage to get the most from your feed. 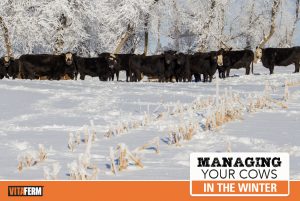 The changing of the seasons is inevitable. That’s true whether you’re running Angus cows in North Dakota or Hereford and black baldie cows in south central Mississippi. However, when you’re a cattle producer whose livelihood depends on those mama cows, the changing seasons mean making a few adaptations to cow nutrition and care to make […] 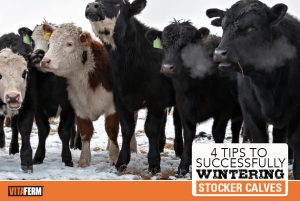