The two most vital nutrients in a cow’s diet are energy and protein. Energy plays a very key role in the reproductive and lactation process, calf growth, weaning and overall performance. However, without the proper amount of protein in the diet, the amount of energy and all other nutrient intake and absorption levels can be impacted. Therefore, it is important to think of protein and energy as working in sync, and to know what is in your cows’ diets and supplement them as needed.

“As a nutritionist, when an animal is having breeding or reproduction problems, I look at energy and protein because the cow’s requirement for energy and protein is measured in pounds, not milligrams,” said Kevin Glaubius, Director of Nutrition for BioZyme® Inc. “Think about a cow eating 30 pounds of forage a day and only four ounces of mineral. Less than 1% of her feed is mineral.”

With just a small portion of the overall diet devoted to a mineral program, it is so important to know the nutrient needs of the animal. That is why BioZyme offers complimentary forage testing and ration balancing to its customers. Glaubius said that late August and early September are good times to test forages because producers are likely finished processing hay, and it has had ample time to dry. (Read more about forage testing in part two in our series.)

“We’ve got to make sure we have energy and protein right first, then combine them with a good mineral package that fits forages. Then, the producer is going to have a lot better success. The forage tests are so important in in determining what the producer has and what he needs,” Glaubius said.

Energy requirements are at their highest at breeding through early lactation. Producers don’t want to slack on protein at breeding through calving because this not only impacts the cow’s energy, but also plays an important part in the calf’s immunity and future health. And just as these times are critical to proper supplementation, remember to save some costs on protein supplementation at weaning time. The cows often don’t require this extra protein once the calf is weaned.

“We want to help producers know what they have, know what they need, and try to optimize and minimize their nutrient costs the best we can,” Glaubius said.

For more information about the hay testing services offered by BioZyme, contact your Area Sales Manager. 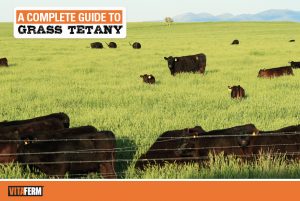