The cattle business is filled with risks. However, for all the uncertainty there are an ample amount of opportunities available for those producers who manage their risks and plan accordingly. With so many external influencers in the cattle market such as the environment, the recession and a pandemic, it might seem daunting to plan for the future.

Forecasting the future to gain as much profit as possible takes many factors. With some astute advice from an industry expert and scholar of the markets, producers can try to achieve the profit they are seeking.

Derrell Peel, Oklahoma State University Extension Livestock Marketing Specialist, suggests numerous opportunities for cow-calf producers exist, especially as the markets have steadily climbed out of their slump in July and early August. He adds the futures markets are looking good, and with proper planning and reasonable input costs, producers are likely to turn a profit.

“We always have some idea based on where the market is at this point and frankly, I’ve been pretty impressed in the last few weeks with the way these markets have improved. We have a consistent signal across the industry right now, which is very good. When you don’t have that you know something is going to change; something is going to give. The outlook for the markets has improved somewhat in the second half of the year. That said, there are a tremendous amount of uncertainties out there. There’s a range of things that could improve or go the other way,” Peel responded when asked to forecast the fall market.

Peel offers three considerations to the cow-calf producer to maximize the profit on their herd this fall. However, before any action is taken, the producer needs to know his or her budget. What are the expenses of the operation? How much does it take to run a cow in a given year? What resources are available? Will you need to buy additional resources before the next calf arrives?

In parts of the Midwest where drought has been an issue, early weaning is a good option to stretch feed resources. There are both advantages to the cow and the calf, from a nutritional standpoint. Peel explains.

“Early weaning is actually one of the first things I would think about because pulling those calves off of the cow reduces her nutritional requirements dramatically. What forage supplies you do have left at that standpoint can go a lot further for the cow by simply removing the calf,” he said.

Peel said that cull cow prices have been good and will remain positive for a while. He suggests that if you’ve weaned already to sell any cull cows now instead of waiting until later, as the cow market typically hits a seasonal low in late fall.

Culling decisions should start with preg checking cows. Then, cull on any physical attributes that might be detrimental to the herd like mouths, feet and udders. Follow the hierarchy of culling factors that includes open cows, older cows and the need to keep replacement heifers.

“If you pull calves off now because forage resources are low, it makes sense to do some early culling. Preg check now instead of waiting and use those same factors that would drive culling decisions now in late August or September instead of early November. Producers have the opportunity to improve their returns now instead of paying to keep a cull cow around,” Peel said.

Decisions about what to do with your calves might take some more planning and following of the markets. Although the markets are steady, and a producer could benefit from selling calves now, according to the futures, there is some potential for further economic gains through retained ownership, even if that entails only a short backgrounding session.

Retaining ownership of calves for a while could lead to some potential increased profits depending on how long you want to feed them and what your resource inventory looks like. If you background them even until they are “normal” weaning weights, you will likely feed them in grain in a confinement or semi-confinement situation, according to Peel, so you will you need adequate grain and feed sources.

“Evaluate retained ownership or decide to sell now – short backgrounding could pay off. The markets look pretty positive; the futures are strong right now so here’s an opportunity to do some risk management. Using the futures as an indicator of where markets might end up – regardless if it is this fall of the first quarter of next year, there are lots of opportunities to manage risk,” Peel said.

The combination of a positive outlook on cattle prices and the availability of feed makes retaining ownership through heavier weights more appealing than selling now; however, there is always risk. Grain is fairly inexpensive, and there is a big corn crop this year with plenty of supplemental feeds available.

Even with the hurricane-force winds that took down thousands of acres of corn across Iowa and northern Illinois, that damage will have a local impact rather than a global impact on grain prices. And producers should still have the chance to graze some of those fields that are too downed to harvest in traditional ways. In addition to grazing stalks – both harvested and not harvested, grazing wheat through the plains states is another alternative that Peel says looks like a great alternative to help increase profitability.

With adequate rainfall and moderate temperatures through much of the Wheat Belt, those who want to maximize grazing will start planting wheat by the first week in September. However, hot, dry and windy conditions could be detrimental to any hopes of good wheat pasture.

“Physical conditions are good now for planting wheat for forage. We’ve had quite a bit of rain in Central Oklahoma, but even far Western Oklahoma has had some improvement. Calf prices might go up between now and October, when we’d typically start grazing wheat, if we don’t buy until October. But even then, the futures indicate there is some potential for profit when selling those calves next spring,” Peel said.

Of course, he indicated that producers have to consider if they are raising wheat for purely grazing or for the dual purpose of grazing and grain production. Early planting can lead to challenges like army worms, however, if using for a forage, the benefits will usually outweigh the challenges.

“There are still risks with pandemic, potential problems in meat markets,” Peel said. “There is plenty of risk out there, but plenty of reasons to evaluate opportunities.”

Producers should take the time to manage their risks to help maximize their returns. In an era of uncertainty, increasing profitability in your business is a sure bet that everyone can agree on. Know your budget. Calculate your breakeven and manage your herd and follow the best considerations to help you see the most return on your investment. 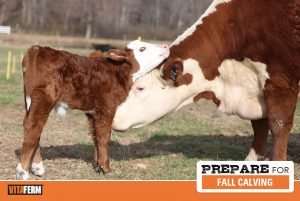 Although the summer heat makes it hard to think about fall, those producers who utilize fall calving as a management option likely already have calves on the ground. Fall calving cows are known to calve earlier than expected and with this year’s soaring temps, those calves might even have arrived earlier than usual.  There are definite benefits to fall calving. A key advantage […]