It’s no secret, efficient gain in the feedlot means more pounds with less feed; and more efficient pounds equal more profit. However, when big, grass-fed yearlings come in to the feedlot and have to transition to a high-concentrate diet in a short period of time, it is well known that a great start will lead to a great finish.

Any time we move cattle from one environment to another and change their diets, they are going to experience stress. Cattle under stress are often prone to go off feed, but when transitioning yearling cattle to a feedlot diet, going off feed is the last thing we want to happen.

“Heavier, yearling cattle are less efficient, and it’s important to get them on finishing ration as quickly as possible. This adaptation period is the most stressful time on the rumen environment of a feedlot animal,” said Dr. Casey McMurphy, Beef & Dairy Technical Support for BioZyme® Inc. “This adaptation period is where Amaferm® can play a major role in supporting the microflora populations to aid in digestion and absorption, leading to improved performance.”

Amaferm®️ is a prebiotic designed to enhance digestibility by amplifying the nutrient supply for maximum performance. It is research-proven to increase intake, digestion and absorption.

Recent feedlot research conducted by The Ohio State University shows that including Amaferm in feedlot starter diets helps improve average daily gain and feed efficiency during the stressful first week of the high-concentrate starter diet. On similar weight cattle, fed the same amount of dry matter for a week, cattle given 1.5 grams/head/day of Amaferm recorded an ADG of 0.62 pounds/day and a G:F of 0.03. When the dose of Amaferm was doubled to 3 grams/head/day with the same DMI as the smaller dose, the results doubled. ADG increased to 1.23 pounds/day and G:F increased to 0.06. Amaferm was fed in combination with an ionophore and therefore assumed to be additive in its response.

The Amaferm advantage is important to the diet, as the prebiotic improves both nutrient digestion and absorption. According to the results from the OSU research, the improvement in performance may be due to the ability of Amaferm to minimize nutritional stress due to subacute acidosis, as a reduction in rumen lactic acid concentration by stimulating the development of Megasphaera elsdenii, which had been reported in several previous studies.

“If we can keep the gut healthy, it will help keep the cattle healthy, but more importantly keep them eating and that is the focus of a nutritionist. Amaferm helps the good bugs do their job better,” McMurphy said. 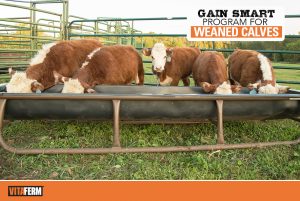 It’s weaning time. Whether you are retaining your own stocker calves or getting them in from other producers, it is important to have a plan to grow those calves in a healthy, efficient manner. The Gain Smart® Stocker Program is one program dedicated to growing cattle in three easy steps. The Gain Smart Program is built around Amaferm®, is a natural […]