Fall calving is on the horizon, and it is important to keep the nutritional needs of the cow herd top-of-mind. As cows enter the last stage of gestation and prepare to calve, their nutritional needs are at her highest.

During the last trimester, 75% of the calf’s growth takes place, the organs mature and “brown fat,” the energy source for newborn calves is developed, making the cow’s nutritional needs at their peak. In addition to the growing and developing calf, the cow needs to be in good body condition score to have the energy and stamina to push and deliver her healthy calf.

“Thin cows have more calving difficulty because they can’t push as hard and they get tired during birth,” said Twig Marston, Beef Business Development & Field Support for BioZyme® Inc. “The lungs are also the last of the organs to mature in the calf, and without good nutrition in the last trimester, it is difficult for those calves to get started and show vigor at birth.”

Although fall calving has many advantages, the heat stress associated with the summer days during late gestation is not one of them. That is why feeding a supplement like VitaFerm® HEAT® is important to help eliminate heat stress and keep the cow healthy during the last weeks of gestation.

While the temperatures stay above 70 degrees, VitaFerm HEAT is the best supplement to provide your cows. Once the temperatures start to cool off, and you are preparing those cows for breeding, you can transition them to VitaFerm Concept•Aid® to ensure they are still benefitting from the Amaferm® advantage.

Amaferm, Biozyme’s proprietary prebiotic, has been proven through numerous research trials to impact intake, digestibility and nutrient absorption. Mature and dormant forages are lower in protein and energy concentration and have greater indigestible fiber than when the forages are actively growing. Amaferm aids rumen fungi and bacteria to unlock the protein and energy that is available. This increase allows cows to increase the intake of forage, and the net result is the cows can consume up to 5% more feedstuffs to maintain their body weight and increase performance.

Other studies have shown cows consuming Amaferm will have nearly 10% greater water intake than cows without the prebiotic. Increasing feedstuff digestibility improves feed efficiency, improving the economics of feeding fall-calving cows. Finally, Amaferm has been shown to increase the ability of the small intestines to absorb the nutrients in greater volume and with less energy expenditure when Amaferm is included in the diet.

“We need to be realistic about the temperature and humidity in fall and relieve those stressors as much as possible,” Marston said. “HEAT will help alleviate heat stress, letting the cows milk more which will be reflected in the calf’s health and performance.”

Ideally, the temperatures will cool off in early fall, and allow producers to start feeding Concept•Aid at least six weeks prior to the start of breeding. Concept•Aid works to increase fertility and conception rates, which are already to an advantage in the fall-calving herd due to breeding during cooler temperatures.

Several studies have shown the detriment of fever on embryo development and pregnancy rates. One study indicated that beef cows experiencing 104ºF rectal temperature had zero successful pregnancies while those cows with 101.5ºF temperatures were nearly 50% pregnant. BioZyme research indicates Amaferm will reduce body temperature by about 0.5ºF. The ingredients in HEAT mineral have been shown to decrease body temperature by nearly 1ºF. Hot and humid weather have long been associated with infertility, making management practices that cool cow’s core temperature an aid to increasing pregnancy rates.

Whether supplementing your fall-calving cows with HEAT or Concept•Aid, it is important to remember that both provide the Amaferm advantage to your herd. Amaferm is a natural prebiotic that is research-proven to increase the energy available to the animal, resulting in more milk production as well as the ability to initiate and maintain pregnancy and fertility. 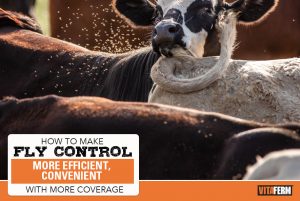 Fly control is an investment in your herd. Horn flies cost beef producers more than $1 billion annually, and face flies can contribute up to $150 million in losses per year. House flies can be responsible for the transmission of BVD and scours and influence BRD, while stable flies are a huge bite hinderance to […]