This article may seem several months early for many cattle producers in the Upper Midwest; the combine and grain dryer demand a lot more attention than the cow herd this time of year. However, early fall is actually the most opportune time to evaluate bull power, even if you don’t act on it until next spring. In many cases, the decision is quite easy and can save you significant time and money. Here are a few simple evaluation tips:

Step 1: Pull the bull. This may seem overly mundane, but bulls that remain with cows past the desired breeding season often exit the farm far quicker than they deserve. If cows are open after 90 days with a bull, it’s likely her fault, not his. There’s no need for a bull to chase a cystic cow every 10 days, risking injury to both parties. On the other hand, if a number of cows are still cycling after the bull comes home, then the problem is entirely different. A semen check (BSE) after the bull arrives home is a good idea to diagnose the problem and save feed costs from a potentially sterile herd bull.

In any case, pulling the bull early is a sound management decision. If the bull will be used again for a fall calving herd, a 90-day rest period is a good idea to allow him regain weight and recharge his sperm count. This also prevents those “straggler” calves that get sorted off and discounted on sale day.

Step 2: Look at him. Again, an extremely ordinary step, but one that is crucial to complete right after he comes off cows. Where’s the first place to look? Joints. If a bull shows signs of swelling or inflammation in his hocks or knees, it may subside after 30 days, but it will likely get worse as the bull ages. If it hurts too much to service a cow, he won’t. Bulls that have problems with mobility should be replaced, but their issues are more difficult to notice after he has laid by the round bale for two months.

The more obvious critique of the bull is sometimes where mistakes are made: How thin is he? In some cases, thin bulls simply don’t fit the environment, and culling is necessary. However, in some multi-bull pastures, the thinnest bull is the one that bred all the cows! Some of this is natural pecking order, but DNA parentage testing is the only way to truly evaluate it. Sire verification of replacement heifers can be a very useful evaluation and management tool for minimal cost. In any case, be careful not to give the fat, lazy bull a free pass at the expense of the bull doing all the work. 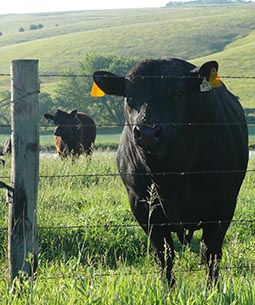 Step 3: Grab the calving book. As you wait for the next hopper load or sit in line at the elevator, study the calving book. If the sire is known, were the calves vigorous at birth? Was the calving ease acceptable? If birth weights were collected, were they good enough to try the bull on heifers? There’s a number of things to evaluate prior to pushing down the scales at weaning.

If you are keeping daughters back, the bull better meet your expectations. If the bull has been around awhile, multi-year comparisons may show a bull’s tendencies, good or bad. If you don’t have a calving book, consider it before the next calf hits the ground. At the very least, recall back to the calving season. What went wrong or right? Could a new sire fix some of the woes?

Step 4: Get him off the feed bill. If the decision was made to cull a bull, there’s no reason to let him destroy your $400 bale ring! You have better things to do than flip that manure covered feed bunk back over so you can feed him every day. Pound price for cull cows and bulls operate under the same supply and demand curve as everything else. If you haul your bull to town when everyone else does, price goes down. Unless he is gaining a tremendous amount of weight for little to no cost, the economics don’t work. Save the feed resources; invest in a better bull in March.

The bins will be full in short order and the combine parked once again. The bawl of weaned calves will annoy you, but the check in hand somehow erases that from memory. Now is the time to make sure your herd bulls are earning their keep. New bale rings are expensive.

If you’ve driven throughout the rural Midwest in the last week or two, you’ve likely noticed a significant difference in the landscape. Where tall corn fields once stood, you can now see for miles, as harvest is in full swing and only the stalks remain.  “In the upper Midwest and in the Plains, there is an […]

Fall could undeniably be one of the most complex seasons of the year. There are crops to harvest, calves to wean, some operations are calving and yet others are preparing for their next spring calf crop. All those production cycles have various nutrient requirements on the herd, all while forages are in varying stages. Add in the mood swing Mother Nature throws out with temperature […]